The broken bolt breaks along the root of the thread at the lower end of the thread, and the fracture morphology. There is no deformation at the fracture, and the outer diameter is consistent with the outer diameter of other positions. The section is flat and has no tapered cup-shaped features. The middle of the section is mainly composed of radiating fibers, and the outer edge is porcelain-like. There is no shear lip slope, but there is a torsional shear step, indicating that it is a torsional fracture. In two

The broken bolt breaks along the root of the thread at the lower end of the thread, and the fracture morphology. There is no deformation at the fracture, and the outer diameter is consistent with the outer diameter of other positions. The section is flat and has no tapered cup-shaped features. The middle of the section is mainly composed of radiating fibers, and the outer edge is porcelain-like. There is no shear lip slope, but there is a torsional shear step, indicating that it is a torsional fracture. There is a small dark brown mark on the edge of the porcelain zone outside the fracture of the two fractures, indicating that there are crack defects.

Metallographic examination of all six failed parts was done by metallographic examination. The horizontal and longitudinal observations were taken at the undeformed, deformed and fractured locations, and the metallographic structures were the same, all of which were relatively uniform tempered sorbite. Free of ferrite and undissolved carbide particles. Among them, there are few non-metallic inclusions, and oxides, sulfides and silicate particles are all within the first order. However, the precipitated ferrite blocks that make up the sorbite are slightly longer and slightly more than the normal normal bolt structure.

The bolt structure 500?— is near the fracture of the two broken bolts, and micro cracks are present at the root of the thread. The crack tail is sharp and there is no decarburization and plastic deformation marks at the open end. No cracks were found in the same part of the other failed bolts. It can be seen that the crack of the broken bolt exists before the failure and corresponds to the old crack trace remaining on the fracture.

Since the test specimen is taken from the failure piece and has been deformed by force at the time of installation, there is a hardening effect, so the actual yield strength should be lower than the value; in addition, the yield point tested by the pointer method has hysteresis compared to the true yield. Point, the measured force is low. From these two factors, the yield strength Rs is too high, and the actual yield strength should be low. What's more, most of the values a€?a€?are lower than the minimum requirements of the material (830N/mm2), and the hardness is not up to the technology. The requirement is that the failure piece is inferior in performance. When the specified torque is applied, the force exceeds the yield strength, and the bolt will yield deformation and relax.

Although the chemical composition of the failed parts meets the standard requirements, the three main alloying elements of C, Cr and Mo have lower limits. Improper handling can also result in low performance. In particular, Mo element is the main addition element for increasing the yield strength, and its low level causes the yield strength to be affected, which is one of the reasons for the low performance. In the metallographic structure, there are no free ferrite and undissolved carbide particles, indicating that the quenching temperature and the heat preservation during the treatment are normal. However, the morphology of precipitated ferrite needles that make up the sorbite is somewhat more, but it will have an adverse effect on performance, which will result in low strength and hardness, which corresponds to the performance test results, which is the reason for the low performance. two. Due to the normal quenching, the tissue is not ideal. It should be high temperature or too long when quenching and tempering, which can be proved in the relationship between tempering and tissue morphology change and hardness change.

Although the yield strength of the two fractured parts meets the requirements of the index, the tensile strength still does not meet the requirements. Due to the micro-cracks at the root of the thread, the bolt is broken and the strength is greatly reduced. The reason is that the stress concentration at the crack tip exceeds the strength, causing partial breakage and increasing the crack. The force cross-section becomes smaller and the stress increases, and finally the overall fracture, macroscopic The performance is extremely low. Due to the local damage of the tip of the crack, there is no plastic deformation on the macroscopic side, and there is no cup-shaped fracture and flat burying, leaving only the porcelain-like fracture and the radiation fiber of the crack size. From the residual crack morphology, the tail is sharp, the opening is free of decarburization and tissue plastic deformation, and the surface is dark brown. It will not be a defect of raw materials, nor a crack generated when the machine is loaded. It can only be produced during the post-processing process. Quenching and tempering cracks.

Conclusion 1 The loosening deformation of the bolt is caused by the mechanical properties of the bolt not meeting the technical requirements and cannot withstand the normal pre-tightening torque. 2 bolt breakage is caused by microcracks at the root of the thread and insufficient strength. 3 bolt mechanical properties can not meet the technical requirements and the material alloy element content is low and improper handling. Microcracks are also produced during processing.

Abrasive belts belong to coated abrasives. It is also called flexible abrasives. When polishing, it is more flexible and safe than the solid grinding wheel, and it has the advantage of higher precision and lower cost.

Aluminum oxide can be in continuous grinding to form new edges and is better than other abrasive grinding. Aluminum oxide cloth can be used for narrow belt, Flap Disc, and flap disc, for polishing pine wood, log board,furniture, handcraft products and vine products. 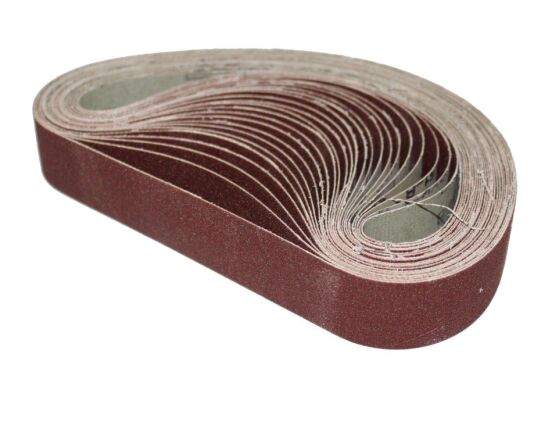 After 30 years` development, Abrasive Cloth grinding has become a complete and self-contained system of new processing technology. Because of its high processing efficiency, wide application range, strong adaptability, low cost, safe and convenient operation, it is well received by customers. In foreign countries, Abrasive Belt grinding technology has made great progress. It can be applianced for more and more processing object . It can process almost all engineering materials, from the general daily life appliance to application of large aerospace equipment.

If you have any questions, please contact with us directly. The abrasive cloth are produced with high quality and good appearance. Welcome you can visit our factory for inquiry. Please send mail directly to us.